The market has digested the Fed's interest rate increase this Wednesday, but at the same time, it is most interested in the first press conference of the new US Federal Reserve Chairman Jerome Powell. The EU and the UK seem to have agreed to a GBP increase by 150 points this Monday ...

The Fed will raise the rate to 1.75% in the evening of Wednesday

It seems that no one doubts that the Fed will raise the interest rate this Wednesday on March 21, 2018. According to a CME Group, futures laid in prices 95% of the probability of an interest rate increase from 1.5% to 1.75%.

Jerome Powell, who replaced Janet Yellen earlier this year, continues (which is logical) the rhetoric of his predecessor, noting the “solid growth” of the economy and the “strong labor market.”

Since the results of the Fed meeting are predetermined by the markets by 95%, then volatility in the market will arise only because of the reorientation of the expectations of the number of such increases further: more hawkish statements can move sentiments closer to the “4 rate hikes this year”, that means the strengthening of the dollar. But do not rush ... you can also sell the dollar if the new head of the Fed (and this is his first meeting) is too gentle. In any case, this is Jerome Powell's first press conference for us, which is already an additional fundamental stimulus: journalists will have many questions for him.

Not by FOMC alone. The focus of this week will also be the pound sterling, which received a portion of inflation statistics (which is declined from 3% to 2.7%), and will survive the meeting of the Bank of England.

Fundamental interest of the market in the Bank of England's statements is the actual significant excess of inflation over the target one, heated to "bright”, after a statement on Monday that the UK and the EU agreed on the terms of the Brexit transition period. 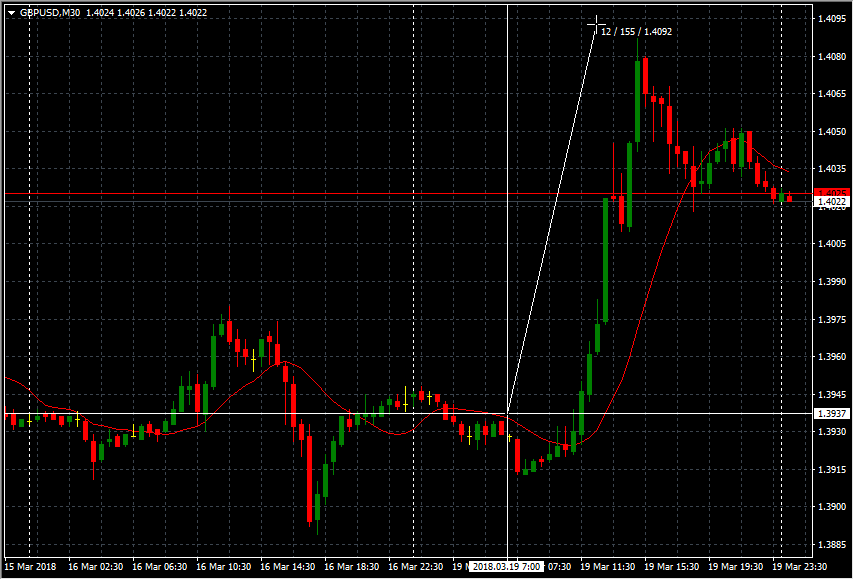 The transition period is calculated from 29 March 2019 to December 2020 and is designed to smooth the way to future permanent relations.

Expectations of the Bank of England interest rate growth are set by the market at 60% of the probability of its increase already in May.

This Thursday, there will be the British Regulator’s meeting. Most likely, the market will be interested in the minutes of discussions within the MPC committee as well as the voting structure. The chances that the rate will exceed the current value of 0.5% under the results of the meeting are very little (<30%) but volatility can be significant only because of certain changes in the word rolls in the minutes of the Regulator’s meeting.

We will turn our trading attention to the voting structure, and if there is at least one vote "for" the rate increase, the pound is likely subject to a strengthening in the same second.

Another regulator makes it clear that revenue growth is more important than the growth of the number of people employed. According to the results of the published minutes of the previous Bank’s meeting, the regulator is quite optimistic both in relation to the labor market and to the economic prospects in general. The RBA expects a broader economic recovery and a gradual increase in wages. All this can spur further increasing expectations of the tightening of the monetary policy of the Reserve Bank of Australia.

What awaits us in the new trading season

In March, we celebrate our sixth anniversary but, despite this remarkable event, as experience, practice and history show, one should not expect serious quantities of trade signals this month as the economy is now "reporting" for the winter period of its existence. The winter economy is always slow.

Starting from the beginning of April, we are waiting for additional publications of quarterly reports (for the first quarter of 2018), which will gradually grow into reports in May (reports of the active phase of spring), which will bring serious volatility to the market. The peak of volatility and reactions will be reached by the second half of the summer.

By the new trading season, we have prepared for you an excellent surprise (it was its preparation that distracted us from blogging) - run an autoclick and check everything personally ;)

Do not be distracted, today is Tuesday and there has been already a trade signal for the UK CPI. Let's not pass the others:

Wednesday, UK Average Earnings, although this report is complex and comprehensive but it is worth paying attention on that, in the case of the growth of wages, there will be an excellent volatility.

Wednesday, US Fed Interest Rate Decision - the fate is sealed, the rate seems to grow, there will not be apparently a signal (as fact = forecast) but pay attention on the increase in volatility at this moment (read above).

Thursday, UK Retail Sales - before the meeting of the Bank of England, it can quite get on nerves of the market.

Thursday, UK BOE Interest Rate - we are mainly interested in whether someone will "for" in the structure while forecasts are 0-9 (1-8 will be to a pound buying).