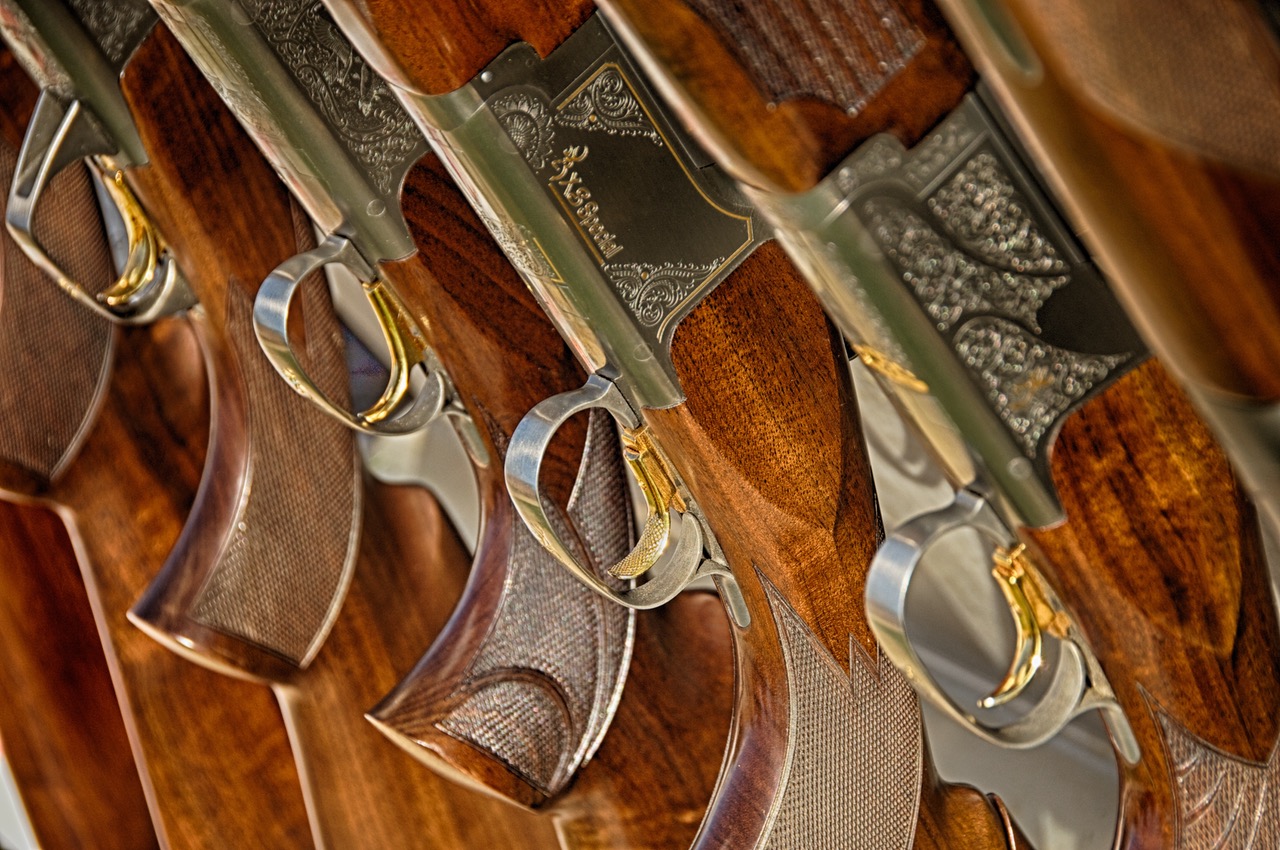 Recently, the need to search for the One-Click-Trading for MetaTrader has disappeared, since “metaquotes”, starting from the 482 build of the terminal, offer this option for free. The main feature of this innovation is the trading with the chart in one click. Let's try to understand the advantages and disadvantages of this method in autoclick trading.

ONE CLICK TRADING (OCT) IS A NEW FUNCTIONALITY OF METATRADER

In order to quickly see the new terminal functionality, you only need to press the “Alt + T” combination keys in the terminal, and then an OCT panel will appear in the upper left corner, in which you can set the trading lot volume, as well as make Sell and Buy  of the currency set on the chart. 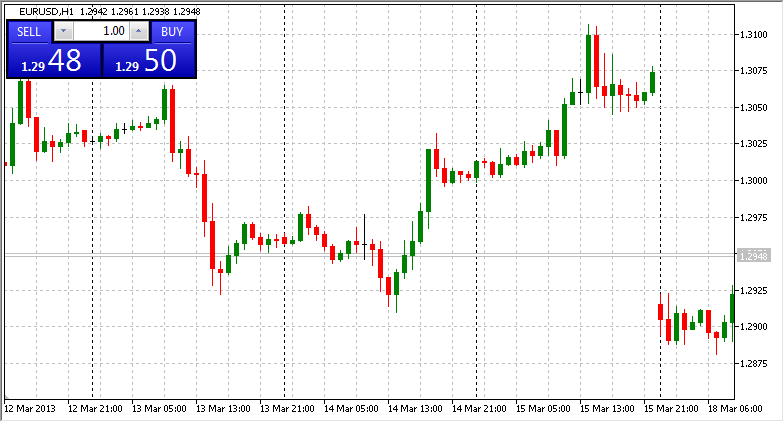 A new function can also be induced via the context menu “One-Click Trading”, which appears if you right-click on the terminal chart.

The lot can be set, either by adding or subtracting volume with the buttons of the One Click Trading panel or by entering values manually. Therewith, the terminal logic is saved: the starting lot can be either by default or strictly registered in the terminal settings. The values such as last, used and set are available. 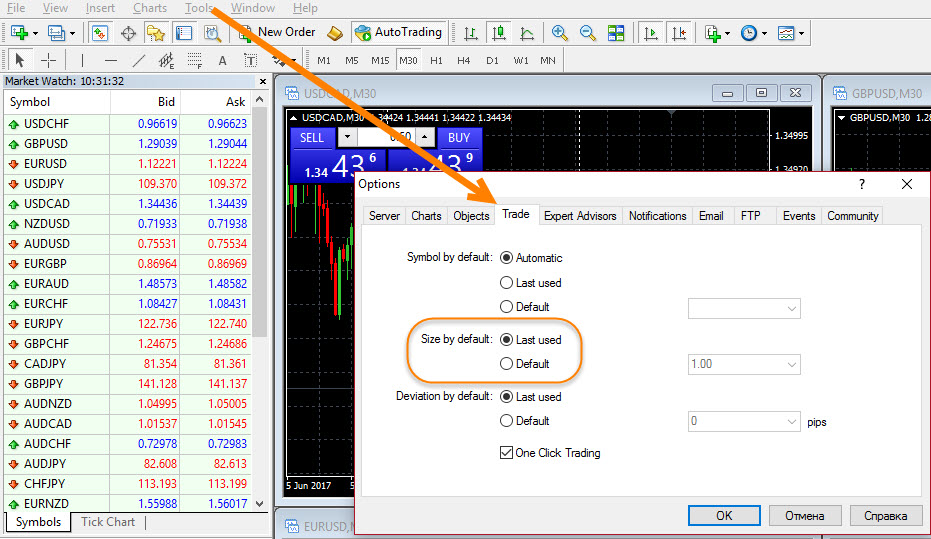 Trading from the Chart

Having a new panel on the MetaTrader chart, you can enter the market in one click. The first click on the OCT panel should be accompanied by a notification describing the work of this function, which you must confirm in case of agreement. All subsequent clicks will lead to the opening of the market position.

Attention, if you already have permission to one click trading in the terminal settings, the corresponding warning will not be shown, and after clicking, the order will be opened immediately. 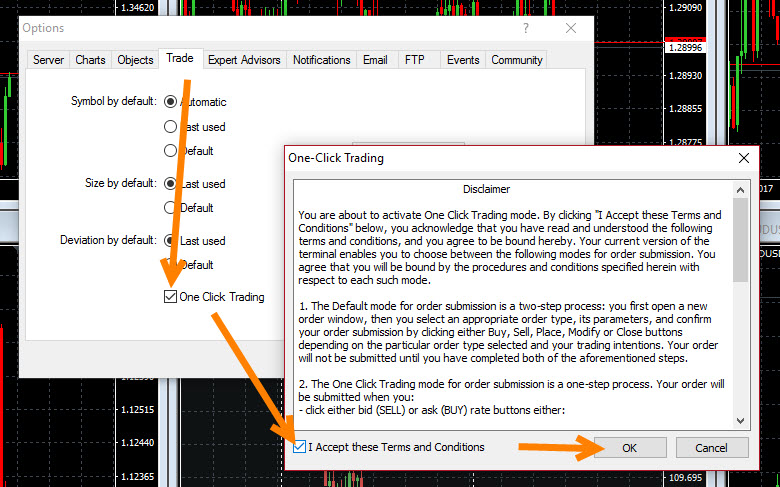 How to adjust slippage

Since one click trading is done with minimal settings on the OCT panel, a completely logical question arises – how to regulate slippage. It is possible to adjust “slippage”, it is the “Maximum deviation from the requested price”, through the terminal settings window. Go to “Service” – “Settings” – “Trading” and choose “Default deviation”. 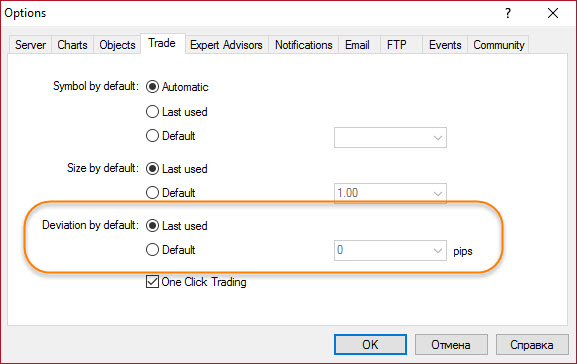 For a start, we carried out a little testing and did not determine any advantages over the standard “Order” window of the terminal: One Click Trader opens orders with the same speed as the “Order”  window of the terminal and vice versa. For those who want to conduct their own home tests, remember that the second order is opened more quickly after any trading operation was executed for 30 seconds in the terminal before it (relevant to MT4, but not for MT5, in which the bug is corrected). In view of this, in your tests, only the second and third orders should always be involved. We discussed this feature with you in the pages of our book in the section of improving the work efficiency.

As a result, there is no advantage in speed; they are similar to the speed of the “Order” window of the terminal.

Size of the Window

For a news trader it is important to effectively use the entire space of his (her) monitor. Now, thanks to the new function, it became possible to get rid of the use of a standard window, if it seemed uncomfortable for one reason or another. The screenshot shows that the minimally “grouped” terminal with the OCT panel takes up less space than the terminal with an opened “Order” window (which, by the way, is not scaled).

OPERATIONAL INTERVENTION IN THE SIZE OF SLIPPAGE

If we were able to promptly enter new data by the maximum deviation from the requested price in the “Order” window, then, we cannot get such a rate of changes with One Click. To make adjustments, you need to enter the terminal settings.

The “Order” window of the trading terminal also reminded us about the current level of slippage value, now you can accidentally “forget” about such a value, which can affect the effectiveness or safety of your trading.

DOUBLE ORDER CAN DO MUCH HARM

The trader is tempted to trade several orders at once, as the “Sell” and “Buy” buttons no longer disappear from the screen after they have been clicked, so there may be several such clicks. Most likely, someone will hook to such a kind of entry into the market and will be able to use this parameter efficiently, but there are always "buts".

At the time of publication of important news, it is important to send your request first, as there will be enough of such requests from the broker. Of course, the auto-click gives advantages in such a “queue”, but the fact remains: in a random way, in real trading conditions, you can do harm to yourself by opening two orders together.

Nevertheless, from the 482 build of the MT4 terminal, the “Metaquotes” began to support simultaneous execution of eight parallel trading operations, but the near-term review and testing of this issue do not show an increase in performance. More correctly, the performance improvement is present, but no one guarantees that at some moment you will receive a message “busy channel” in the terminal log.

It is more efficient to use one trading account in two terminals (it is enough to install them in different catalogs), but remember that the range of the lot affects the speed of its performance, hence there are requests for new prices or slippage is bigger than that of your colleagues. But still, it’s not good to get carried away by this practice of double entries on the same account, so you can get into a bigger queue, or run into a busy channel.